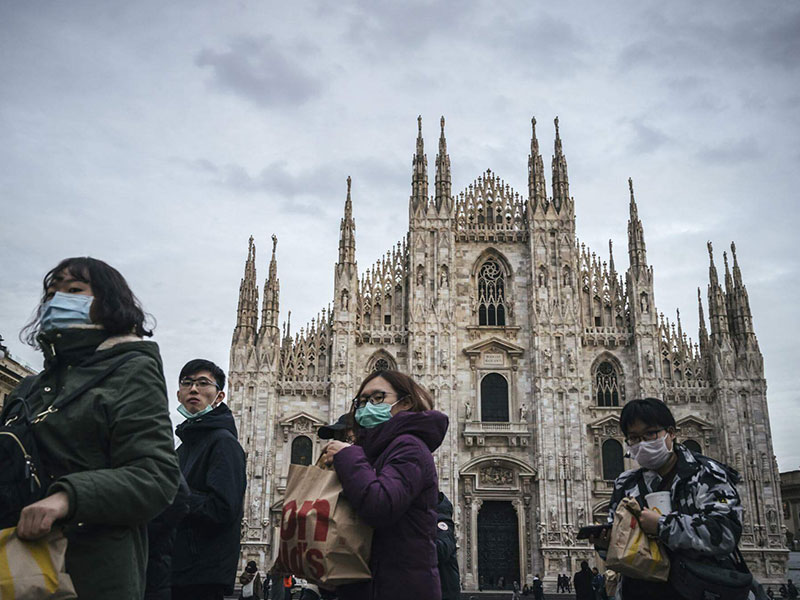 With the novel Coronavirus outbreak at its peak so far, a large share of world travellers are considering to cancel their trips abroad, even at countries where only a few cases containing the virus have been detected.

80,430 of these cases have been identified in China alone, which is the epicentre of the outbreak, followed by South Korea with 6,088 cases.

The fear of catching the virus has pushed many to even question their planned vacations to Europe, whether it is worth it to travel to the old continent at this time.

Following in this article, we have elaborated the situation in Europe, regarding the detected cases, deaths, recovered persons, closed institutions and other measures that these countries have taken in order to prevent another outbreak of the virus, and how all these may affect a trip to Europe.

Is It Safe to Travel to Europe Now?

Italy aside, the number of detected cases in the EU/EEA Member Countries of persons containing the coronavirus doesn’t even top 2,000, which is about two per cent of the total number of reported cases across the globe.

Yet, the number of those that have passed away due to the virus is 114, with 107 of them in Italy.

The European Union has introduced several measures to prevent further spreading, including activating the Civil Protection Mechanism and asking the member states to be more collaborating when it comes to sharing data related to the virus.

Existing border checks have been tightened, with the airports providing information on the virus and how to prevent it and health workers checking travellers for any possible symptoms of coronavirus, like fever and cough.

EU: Coronavirus Is Not Enough to Suspend Schengen

Among all measures taken, the European Union has not seen the coronavirus as a strong enough reason to suspend the Schengen Agreement, which the EU considers as one of its most valuable achievements.

The EU officials believe reintroducing border checks will not contribute anyhow to the slowdown of the virus spreading in Europe, but it would instead turn the countries into “lazarettos” as the Italian Primer said when asked whether Italy would shut down borders as a prevention measure.

In the last week of February, in a meeting held by the EU Commission in a bid to boost global preparedness, prevention and containment of the virus, the Commission decided to allocate an amount of €232 million, in this regard.

In the following days after this meeting, Ministers of the Member States have turned down any proposal on the possible reintroduction of borders, asserting that “diseases don’t know borders”.

So, Should I Cancel My Trip to Europe or Not?

Whether you should cancel your trip to Europe or not, it depends on several factors. You are highly suggested to reconsider any non-essential travel to Europe’s most touched areas by the novel Coronavirus, if:

In particular, try avoiding a trip to some of the outbreak areas in Italy, Germany, France, Spain and Switzerland, as some of the EU members with a higher number of Coronavirus patients. Below you can find more information regarding the safety of travelling to these countries at this time.

Is It Safe to Travel to Italy?

So far Italy is listed as the fourth country with 3,089 cases of persons containing the coronavirus. 107 of these cases have resulted in death while another 276 have already recovered. Another 295 remain at critical condition.

Foreign Offices of several countries including the UK and the US have advised their citizens against all non-essential travel to 10 small towns in Lombardy and one in Veneto, which have been isolated by the Italian authorities due to an ongoing outbreak of COVID-19. These towns are:

The Italian government has also closed schools and some public spaces due to the virus, as a precaution measure.

If you were planning to travel to some other Italian cities aside from the ones listed above, you should bear in mind that many tourist spots have closed due to the virus, including cafeterias, bars, and restaurants, so you might want to check again whether it is worth traveling here or not.

Is It Safe to Travel to Germany?

It is way safer than traveling to Italy, at least, as Germany has reported a total of 444 detected cases and no deaths so far. 16 among them have totally recovered, while two others are in critical condition.

The cases have been detected in the following states:

Germany has ordered the cancellation of all massive events, as concerts, fairs, and exhibitions. It has also issued warnings for its citizens to avoid shaking hands and stay away from each other at least on meter, in order to prevent a further outbreak.

Whereas last Friday, a task force of the federal government of Germany started imposing stricter controls at its border checks, including demanding from travellers coming from countries with a coronavirus outbreak – Italy, South Korea, Japan and Iran – to disclose their health status upon arrival.

If your trip is essential but you are concerned about your health, avoid traveling to the states where a higher number of cases has been detected.

Is It Safe to Travel to France?

So far, 285 cases of persons with Coronavirus have been detected, four deaths and 43 totally recovered.

These are the numbers of reported cases for each region of France:

France has undertaken several measures, including banning all indoor gatherings of more than 5,000 people in an effort to contain the country’s coronavirus outbreak.

Therefore, those wishing to travel to France for tourism purposes should be attentive that other tourism spots may close in the meantime, including the Louvre Museum, again.

But, Will My Travel Insurance Cover My Cancelled Trip to Europe?

An epidemic disease as coronavirus proves the importance of paying attention to the print of a travel insurance policy, so a traveller knows what it includes, and what he/she risks losing for cancelling a trip in cases like this.

In fact, almost every existing travel insurance policy excludes epidemics and pandemics on purpose, as insurance companies are most scared that an epidemic or pandemic by nature could put these companies out of business if they had to pay out millions of dollars for all their policies.

Despite that, there are several cases when they have to, and they do reimburse travellers hurt by a situation similar like the one caused due to the coronavirus outbreak. For additional information check our recent article on Travel Insurance Coverage in Case of Coronavirus Trip Cancellation.